Grasmere to Helm Crag (Lion and the Lamb) round 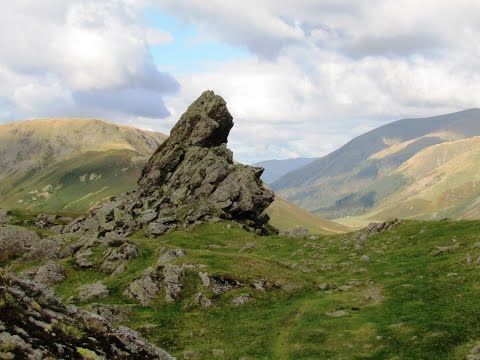 Cumbria is a large county in North West England and contains the Lake District and Lake District National Park. It is bounded to the north by the Scottish Borders, Dumfries and Galloway, to the west by the Irish Sea, to the south by Lancashire, to the south east by North Yorkshire, and to the east by County Durham and Northumberland. Cumbria is very mountainous containing every peak in England over 3,000ft above sea level with Scafell Pike being England’s highest mountain at 978 m (3,209ft). Cumbria is also one of England’s most outstanding areas of natural beauty attracting mountain climbers, hikers and walkers, cyclists, runners and tourists and holds a source of inspiration for artists, writers and musicians. Cumbria consists of six districts Eden, Carlisle, Allerdale, Copeland, South Lakeland and Barrow-in-Furness.

The Lake District is an area with stunning scenery located within in the County of Cumbria. Commonly known as The Lakes or Lakeland it was granted National Park status on 9th May 1951 less than a month after the first UK designated National Park, The Peak District. It is the largest of thirteen National Parks in England and Wales and the largest in the UK after the Cairngorms. The Lake District National Park itself covers an area of 885 square miles and stretches 30 miles from Ravenglass in the west to Shap in the east and 35 miles from Caldbeck in the north to Lindale in the south. Crammed with so much natural beauty the Lakes attract visitors, tourists and holiday makers from all over the world. As the name suggests there are many lakes each with their own uniqueness, amenities and activities such as lakeside walks, sailing, waterskiing, boat trips and ferries. All of the lakes except Bassenthwaite Lake are named by water, tarn or mere and are surrounded by stunning scenery and magnificent fells. There are some wonderful towns to explore such as Keswick, Windermere, Ambleside, Kendal, Hawkshead, Grasmere and Cockermouth all with a splendid mixture of shops, cafes, pubs, bars and restaurants. There are also many museums, theatres, historic homes, gardens and many easy walks for the not so energetic visitor wishing not to climb the fells. William Wordsworth the famous British poet was born in Cockermouth and later lived in Grasmere where he wrote some of his best works before moving to Rydal Mount near Ambleside for his last 37 years. Both places are open to visitors and so is Brantwood home to John Ruskin until his death. Samuel Taylor Coleridge, Robert Southey and Thomas de Quincey all followed Wordsworth to the Lake District. Arthur Ransome, author of Swallows and Amazons, also grew to love the lakes and settled in the Winster Valley near Windermere. The painters Thomas Gainsborough, JMW Turner and John Constable were early visitors to the lakes but it was John Ruskin who settled here at Brantwood on the shore of Coniston Water. Farming and especially sheep farming has been historically and still is the main industry of the Lake District. The tough Herdwick breed with their stocky build and distinctive grey coat are especially hardy for the Lakeland fells and its weather. Sheep farming has probably been here since Viking times and is an important factor both to the economy of the lakes as well as in preserving the stunning landscape which attracts visitors and hence income to the region. Walking is a big attraction in the Lake District whether strolling around the low lying lakes or climbing up into the mountainous fells whichever is undertaken the scenery is magnificent. Alfred Wainwright’s famous hand written book, The Pictorial Guide to the Lake District, published in 1955 is a collection of seven books each illustrated with his unique style and charm of the 214 fells inspiring many visitors and tourists from all over the world.

Grasmere village is a very pretty and popular tourist destination. It is situated on the River Rothay which flows into Grasmere Lake from where the village takes its name. Surrounded by hills the village is overlooked from the north-west by the rocky hill of Helm Crag also known as “The Lion and the Lamb” or the “Old Lady at the Piano”. These names are derived from the shape of rock formations on its summit depending on which side you view it from. To the east it is overlooked by Heron Pike and Great Rigg on the western ridge of the Fairfield horseshoe. To the south-east by Loughrigg Fell and to the west the long ridge comes down from High Raise. There are a number of walks that start from Grasmere and the village is also on the route of Alfred Wainwright’s Coast to Coast Walk. Grasmere is home to Sarah Nelson’s Gingerbread and the famous Grasmere Gingerbread Shop can be found at Church Cottage tucked away at the corner of St Oswald’s churchyard. Church Cottage which was built in 1630 was originally the village school. William Wordsworth who described the village as “the loveliest spot that man hath ever found” lived in Grasmere for fourteen years. Dove Cottage located on the main road just outside the village was once an inn and became the home of the famous poet William Wordsworth for 8 years in 1799. He married Mary in 1802 and three of his five children were born there. Dove Cottage, the Wordsworth Museum next door and Dove Cottage Garden, which has been restore to the half wild state that William and his sister Dorothy created, are all open to the public. Wordsworth moved to Allan Bank in Grasmere village to accommodate his growing family and finally in 1813 to Rydal Mount in Rydal until his death in 1850. He is buried in St Oswald’s Parish Churchyard alongside his wife Mary, daughter Dora and other family members. Next to the church is a Daffodil Garden in memory of the poet. Grasmere Lake, one of the Lake District’s smaller lakes, is both fed and drained by the River Rothay which rises close to Rough Crag above Dunmail Raise and flows through the village of Grasmere before entering the lake and then exits downstream into Rydal Water then continues south to merge with the River Brathay. The rivers then continue into the northern end of Windermere. The lake containing a single island known simply as The Island is leased by the Lowther Estate to the National Trust.

Helm Crag at 405 metres (1,329 feet) sits to the north of Grasmere at the end of a ridge and is recognised by its distinctive summit rocks hence its alternative name ‘The Lion and the Lamb’. The summit has two short parallel ridges and the rocky outcrops at either end of the highest ridge ensures Helm Crag’s name. Only one can be seen from any point in the surrounding valleys and have been named depending on the profile viewed from a particular vantage point. The north-western outcrop is the true summit and a little careful scrambling is needed to stand on the top. When seen from Mill Gill It is called ‘The Old Lady playing an Organ’ from the summit of Dunmail Raise ‘The Howitzer’ and from a point in between ‘The Lion and the Lamb’ but the southern outcrop prominent from Grasmere is the traditional ‘Lion and the Lamb’. The unusual summit at first seems man-made but is it purely natural and despite its low height it provides wonderful views of the Langdale Pikes, Coniston Fells and Eastern Fells. Helm Crag is usually ascended from Grasmere but can be reached from either valley via Bracken Hause or along the ridge from Gibson Knott.

We walk to the end of the car park with the A591 on our right. We cross over the road and go through the gate. We follow the path cross over the bridge and turn left. We head forward following the path until we come to the road at the church in Grasmere. We turn right and follow the road through the village turning left just before the telephone box onto Easedale Road. We head forwards along the road going over a bridge and past a little road coming in from the right. We keep following the tarmac road and when it splits at the signpost Far Easedale and Helm Crag we turn right uphill on a little stony path there is a ‘not for cars’ sign on the side of a building. We go through a gate and bear left. When the path splits we turn right uphill between two walls following the signpost for Helm Crag. At the end of the walls and a big cairn we turn right then start to zigzag steeply uphill. We pass through an old quarry and stop to admire the views from the view point. We keep following the path steeply uphill until it levels out slightly then turn left past the cairn uphill to the top of Helm Crag. We keep following the path and the cairns to the left of the outcrops then drop down to a dip. At the dip we turn right and follow the zigzag path steeply downhill. When we reach the bottom we go through two gates heading towards the bridge over the beck. After crossing the bridge we turn right go through a gate and follow the path towards the stone hut. At the hut we turn left through the gate and at the road we turn right and head forwards along a minor road. At the junction where the road starts to rise just before a bridge we turn right and follow this very quiet road more like a tarmac track to Easedale Road. We now turn left cross over the bridge and retrace our way back into Grasmere and the car park.

This is a moderate to hard walk on good tarmac road, gravel, stony and grass paths and tracks. There is a steep incline and decline.

Grasmere is located just off the A591 in the Lake District, Cumbria.

From the A66 at Threlkeld take the B5322 on the left. At the t-junction at Legburthwaite turn left onto the A591 which runs by the side of Thirlmere. At the roundabout turn right into Grasmere. The pay and display car park is just on the right. The free parking lay-by is on the left before the roundabout.

Parking: There are three Pay and Display car parks in Grasmere and limited free road side parking. There is also free lay-by parking on the main A591.

There are public toilets in the pay and display car park on the right just before the village and also in the village near the police station. For refreshments in Grasmere there are three pubs the Red Lion, the Wordsworth Hotel and Spar and the Grasmere Hotel plus there are many cafes and other places to eat and drink. There are also plenty of shops to browse round. There are three more pubs nearby on the A591 the Traveller’s Rest, the Swan Inn and the Daffodil Hotel and Spar. The nearest town is Ambleside.